(Al Jazeera)—US President Donald Trump signed a memorandum on Tuesday that aims to prevent undocumented migrants in the United States from being counted when congressional voting districts are redrawn in the next round of redistricting.

US Census experts and lawyers said the action would be legally dubious, likely benefitting Trump’s Republican Party by eliminating the largely non-white population of migrants in the US without documentation.

Proponents of citizens-only voting districts argue each vote should carry the same weight. If one district has far fewer eligible voters than another, they say, each vote there has more influence on election outcomes.

Democrats and immigrant rights activists say including non-voters ensures that elected leaders represent everyone who depends on public services like schools and rubbish pickup, regardless of voting eligibility.

The memo argues that eliminating undocumented immigrants from congressional apportionment maps is necessary to ensure that only legal US residents have a voice in federal politics.

“President Trump’s Executive Order on Excluding Illegal Immigrants From the Apportionment Base is another decisive step toward fulfilling his solemn pledge to ensure only American citizens have congressional representation, not illegal aliens,” a senior administration official told Reuters, speaking on condition of anonymity.

“Excluding these illegal aliens from the apportionment base is more consonant with the principles of representative democracy underpinning our system of Government,” the memo states.

It cites one states where there are an estimated 2.2 million undocumented migrants constituting more than six percent of the state’s population. Counting the migrants “for the purpose of apportionment could result in the allocation of two or three more congressional seats than would otherwise be allocated,” according to the memo.

But the move carries major legal questions, and will probably draw litigation. 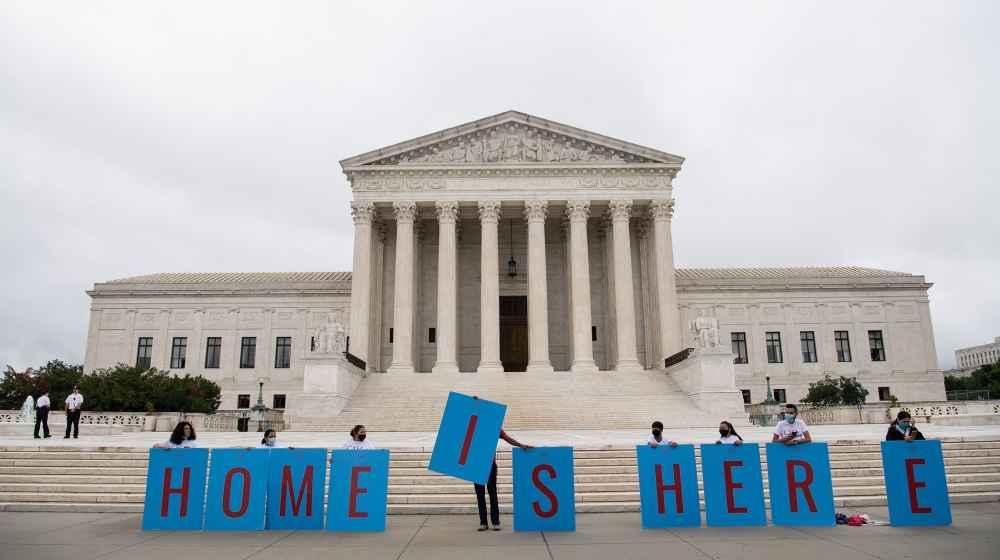 The US Supreme Court in June rejected President Donald Trump’s move to rescind the DACA program that offers protections to 700,000 undocumented migrants brought to the US as children [Nicholas Kamm/AFP]

Citizens-only voting districts are viewed as potentially legal for state-level voting districts, but the US Constitution explicitly says congressional apportionment should be based on the “whole number of persons” in each state. Multiple federal laws have reinforced that reading, and the US Supreme Court has upheld that interpretation.

“All of this makes Trump’s position outrageous,” said Joshua Geltzer, a constitutional law expert and professor at Georgetown Law, adding that the move will almost certainly meet litigation.

Another question is how the Trump administration would acquire data on undocumented immigrants. The 2020 US Census does not ask respondents whether they are citizens, legal or otherwise.

In theory, officials could determine citizenship data through such administrative records as driver’s licence databases, along with citizenship estimates gathered in other Census Bureau surveys. But that data is incomplete, and demographers and immigration advocacy groups have argued they are unreliable.

The government’s census count helps in determining where taxpayer money is spent for building public facilities like schools, hospitals and fire departments, as well as calculating states’ apportionment in the US House of Representatives. The US Constitution mandates that the US count its population every 10 years.

Trump’s planned executive order could prove popular with the president’s base of support as he tries to generate enthusiasm for his re-election in November.

Trump has spent much of his presidency seeking to limit the number of migrants who illegally enter the US, particularly from Central America, and his executive order was another part of his immigration agenda.

It has long been a Trump administration strategy to use the census to identify and limit the political power of undocumented immigrants. But the efforts have faced roadblocks.

In 2018, the administration said it would ask respondents to the 2020 census whether they were citizens, a move ultimately nixed by the Supreme Court.

Following the defeat, Trump issued an executive order in July 2019 aimed determining citizenship status through a trove of administrative records. The order, which called on states to turn over such data to the US Census Bureau, is still facing litigation from immigration advocates including the Mexican American Legal Defense and Education Fund.